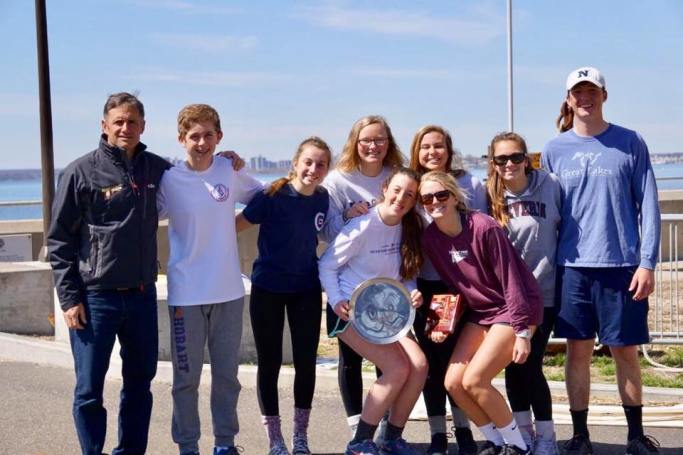 The United States Merchant Marine Academy (300 Steamboat Rd, Kings Point, NY 11024). It was about a five to six-hour drive from Severn. It is in New York so there can be a lot of traffic getting to and from the venue. The sailing building and the boats are east of the Throgs Neck Bridge and SUNY Maritime. At this event, there were 18 teams from the MASSA District. Our first day, the breeze was coming from the West, North-West, blowing from the upper teens with puffs into the mid-twenties. The high wind brought about one to two feet waves that were a big factor in whether you went fast or not.. While they had a fleet of Z420’s and a fleet of FJ’s, we only sailed the Z420 fleet due to high winds. Due to the high-winds we had to switch around pairings, we even had a sailor who usually skippers crew for the first time. The high winds brought along cold temperatures that effected in how fast sailors were run out of energy. Dry suits were key for these types of conditions. By the end of the day we got in 8 races in each division. We showed up Sunday to very different conditions, it was warm and there was no wind. They postponed us until about noon and then sent us out in both the Z420’s and FJ’s. The breeze was about 2 knots with gusts to 4 knots coming from the West. They started a race for A-division but quickly abandoned it. The no race after time was 3PM and that quickly approached and no races were sailed the second day.

We stayed at the Travelodge Manhasset 1177 Northern Blvd, Manhasset, NY 11030). It was a close hotel about 5-10 minutes away. We stopped at Dunkin Donuts the first morning and it ended up being kosher so there was no bacon or sausage there. There were also no lunch places that delivered to Kings Point so pick up lunch the night before or the morning of. There is a good pizzeria called Mario’s (43 Great Neck Rd, Great Neck, NY 11021). There’s also an Chipotle right across the street from it.